This is a test release. It has not been tested as extensively as a production release and is made available for a limited period to elicit customer feedback.

The download links are at the bottom of the page.

We recommend that you back-up important plan files before installing any new release.

Please let us know of any problems or issues you encounter with the release.

1. You can now layout cards by their connectivity in the Cards pane. Select the name of a connection type in the Arrange columns (X) by field of the Layout/Color section of the Cards pane. 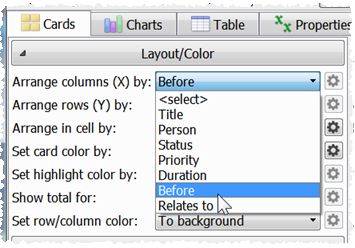 Hyper Plan will attempt to layout the cards so that connections go from left to right.

The ‘children’ of each card are shown in the order set by the Arrange in cell by field.

Only visible connections are used in the layout (e.g. not connections where the connection type is hidden or where the card at either end is hidden by filtering). Unconnected cards are grouped on the right. The layout algorithm works best with trees (e.g. where every card has only 1 inward connection, apart from ‘root’ cards which have none), but can handle graphs (e.g. where cards can have multiple inward connections), including graphs with cycles (e.g. A connects to B, B connects to C and C connects to A). Note that it isn’t possible to layout the cards so that every connection goes left to right (a ‘topological ordering’) if there are cycles.

The algorithm does its best to make the layout compact. Notice how the cards below have been squeezed together vertically to leave the minimum amount of empty space.

In testing, the connection layout algorithm can calculate the layout of over 1000 cards in less than a second. It also coped with a plan containing 3000 cards and 6000 connections. However that isn’t recommended!

2. When a card is selected any visible connections can optionally be selected. This makes it easier to see which cards it is connected to. 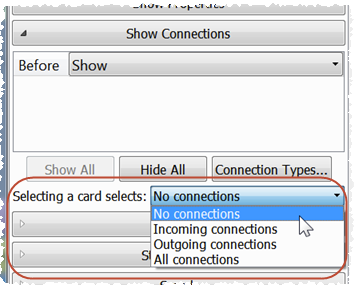 3. The number of connections is now shown in the status bar.

4. The Connection Types window now has a Count column so you can see how many of each connection type there are in your plan. 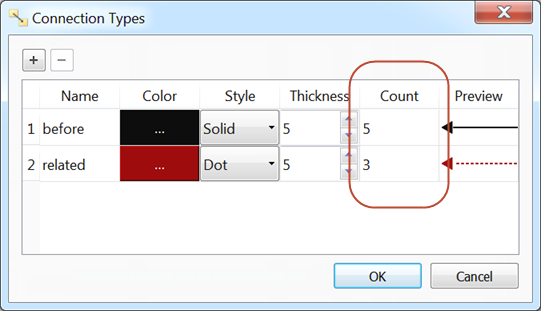 7. Previously the default value for numeric properties was not always honored. This is now fixed.

8. Suggested values for numeric and date properties are now shown in ascending order in drop-down lists.

9. Hyper Plan will no longer attempt to load the last plan opened on start-up if reading that plan previously caused Hyper Plan to crash. This prevents a corrupted plan file from continually crashing Hyper Plan.

1. If you are saving an Excel spreadsheet on Mac OS X in CSV format, you may need to save it as Windows Comma Separated (.csv), for Hyper Plan to be able to import it. This is due to Excel issues with line endings.

Many thanks to everyone that suggested improvements which we implemented in this release.

This test release is no longer available Go to the News page to find the latest release.